In this page you can find a set of scientific articles about IFML: 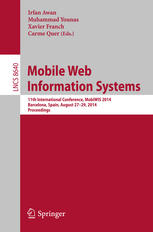 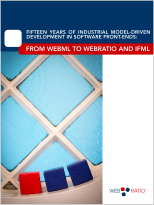 This white paper discusses the history behind the standard IFML, recently adopted by the Object Management Group. It shows how the initial proposal called WebML has been an incubator for research and industrial exploitation on conceptual modeling, exploiting existing experiences in the field and continuously addressing new challenges concerning abstractions, methods, tools, and technologies. It summarizes the essence of the approach and it shows the supporting modelling tool WebRatio at work.

This tutorial focuses on the Domain-specific Language (DSL) called IFML, which has been adopted as a standard by OMG in March 2013. The Interaction Flow Modeling Language (IFML) is designed for expressing content, user interaction and control behaviour of the front-end of software applications, as well as the binding to the persistence and business logic layers. IFML is the missing piece for modeling the front end of software applications and perfectly complements other modeling dimensions in broad system modeling projects. Therefore, IFML works best when integrated with other modeling languages in the MDA suite, such as UML and BPMN. This tutorial illustrates the basic concepts of IFML, presents the design best practices and integration with other modelling languages, and discusses some industrial experiences (also featuring quantitative measures of productivity) achieved by the companion tool WebRatio. At the end of the tutorial, attendees will get a general knowledge about IFML (they will be able to design simple models and to derive models from existing interfaces), will be able to associate front-end design with system modelling at large, will see the associated MDE tool WebRatio at work, and will get a glimpse of real-life industrial applications developed for large enterprises. This will let them appreciate the advantages of a model-driven development approach at work within large-scale industrial project.